A downloadable LI Project for Windows and macOS

This game project include adult theme such as;

A BL (Boys Love a.k.a. Male and Male romance story) visual novel with RPG attribute to play the world. Side scrolling map.

Support us in Patreon!

Summary: In the world of Varr, magic was a major power, lauded yet feared by all. The leaders of the past once forbade the practice of sorcery and death sentence would befall those who dared to use it. The gods, enraged by such deed, decided to destroy their life by releasing a beast known as "Magaran".

The last few wizards managed to calm the gods and return Magaran to where it came from. They made a pact with the leaders of humans and the gods, which was to gather every single person bearing the potential of magic in order to teach them how to control their power, so that they would not rebel against the kings. Leodetable Institute was one of those. The existence of the institute was still appalling to commoners that they had to remain hidden while gathering their students.

Adri, a blind tailor who've lost his memories five years ago, found a strange letter behind his workshop. It detected him as a dangerous latent wizard. By seconds, The Hunters dragged him to a broken door of dimension and put him under custody. He was forced to become Leodetable Institute's student and to learn control his power in minimum four years study without any contact from outsider.

The characters which Adri could follow were four. Saputra was Adri's roommate who talked so much. They quarreled almost every day. The captain of O.S. (Organization of Student), Wood seemed love to annoy Adri so much to the point Adri wished to never know him. Seal and Rafi were the main character's classmates with abuser-and-his-victim relationship.

As he live under its roof, Adri found out that the minister of this institute was planning to overthrow the kingdom. Seal wanted to counter-act that and invited Adri to be one of his member. At the same time, Di-On, a mysterious kid, told him to get out of there as soon as possible.

Will Adri stay or will he go? [ErdaEnos]

Support us in Patreon!

To support us, donate via paypal or patreon!

In order to download this LI Project you must purchase it at or above the minimum price of $16 USD. You will get access to the following files when they are released:

I can't even play the demo thanks to the rar fire

Ah, finally got to play the demo till the end! It's really a great game!

All the characters I've met so far are interesting, though I'm sad I couldn't meet more of the main cast.

The art and music are gorgeous. I'm just frustrated because the game runs slow as hell and lags all the time - it's a bit hard to play because of that. But well, other than that and the need for some proofreading, it's really awesome.

This game is fabulous

The art is really good so is the storyline

Can you make this ayyable by credit?

I'm not sure. what do you mean by 'ayyable'?

Hey! I noticed that the preorder says it'll also be for mac but there's only a windows demo, is it true it'll be for mac too? Just wanna be sure before I preorder!

yes, we're planning to release for iOS too. The game engine we used allowed us to export the game into multiple platforms. The demo version for it is currently under development (checking bugs etc). :)

When will the game be finished?

Bad, Normal, and worst wth are there any good endings in this game?!

There are several good endings, they're the easier ones to gain... and easiest to slip by too if you know what I mean. (I like to use reverse pyschology) *smirk*

i did buy it on Itch but is not download, i dont understand why >.<

Ah, you have put an pre-order so you'll get the game as soon as its released.

Wow, this game looks amazing, it's sui generis, can't wait to play it!

Thanks, Mirael! I work on this everyday. Hopefully, it'll be worth waiting.

Patience is Perfection! All the best!

does the description really list gay romance as an adult theme? pass

For several countries, gay romance still indeed listed as R-Rated theme and/or even a taboo. So to be fair, We decided that it needs to be listed.

No pre-order here?
I love to keep all my games at the same place...

Ah, actually, you can pre order by indiegogo for the moment. You can go to this link and check out the best deal! :D

Pre-order on itch.io...check and bought!

Hello! I really enjoyed your demo. I look forward to seeing more! When I have some extra money, I want to back the game, but I also wanted to make you an offer. There were some issues with repeating dialogue lines, and once with a picture next to the dialogue box being doubled, as well as some grammar and spelling issues. I can fix the spelling and grammar errors for you if you like!  I've done it for a few other games and it can really help make a better impression. If not, that's okay! You can reach me by email at bellannmae@gmail.com

I also plan to write about the demo in my gaming blog, so I hope that helps as well! Take care :)

Forgive me for the wait. I'm happy to entertain you! Thanks for pointing out the problems too. The repeating lines and random pictures appeared to be a memory problem with the engine itself. There is too little I can do with it, which is why I elected to move everything  from rpgmaker to unity for now...

I'll be contacting you about the spelling and grammar errors, thou. I really need the help with them...

Oh, also, Thank you very much for the article! I've read it and you've done an excellent job! I almost cried when I found it on google. :D

I look forward to working with you then. :) Also, thank you, but don't cry! lol I hope that others will find your game interesting also.

Unity is a great engine to use, so I wish you luck!

I tried downloading it but it hasn't been able to work. Is there any other file you'd be able to give me?

Ah, sorry for the inconvenience.

Do you mean the download link or the installation that hasn't been able to work?

So far there hasn't any broken link report. I'll check it up tonight. If, it's the installation, may I know the specification of your computer?

will there be a demo available for mac? I´d love to test this game :)

Yes, there will be one for mac... but, after we change the engine from RPGMaker to Unity. So, it should be working better.

May the stars bless your path.

Hello! :) I just wanted to share some toughts about my exprence playing the demo. It's quite buggy but it's an early demo so whatever. I'm not gonna talk about that. Firstly, let me tell you I love the idea with that interactive side scrolling map. And the art! It's lovely. I honestly don't know what was I expecting but you got me suprised several times with plot. I don't want to spoiler anything but man. I know I'm squishy about nearly everytging but really, the characters creeped me out for a moment there. Definitely nice suprise.
Good luck with the game! I'm definitely interested once it's out! :)

To tell you the truth, I've been re-arranging Leodetable's threads in Lemma Soft, RPG Maker and Aarin Forums. Scheduled those thread to be done by April this year while the game itself at Fall 2017.

It took me years to finalize the script and settle down to use RPG Maker MV for the game engine which I need to learn first... Those were the reason why I have yet update the older threads.

I'll link all related addresses especially the tumblr one, since it's the one with gradual report of progress. 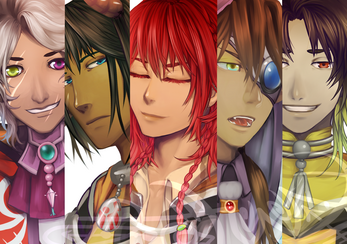 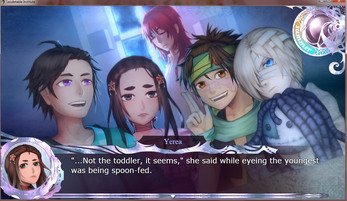 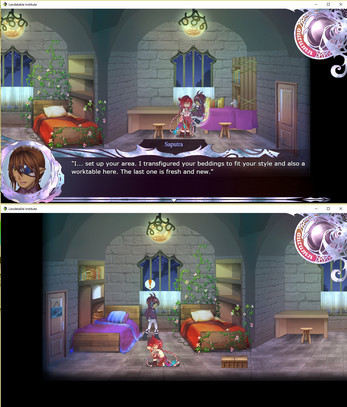 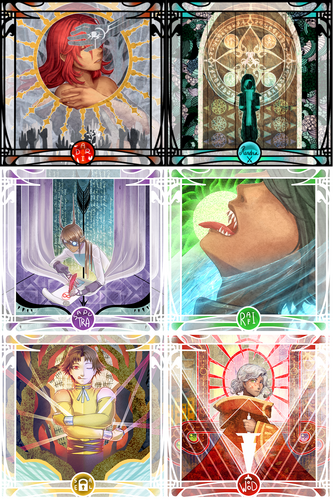